Round Square Conference in Morocco 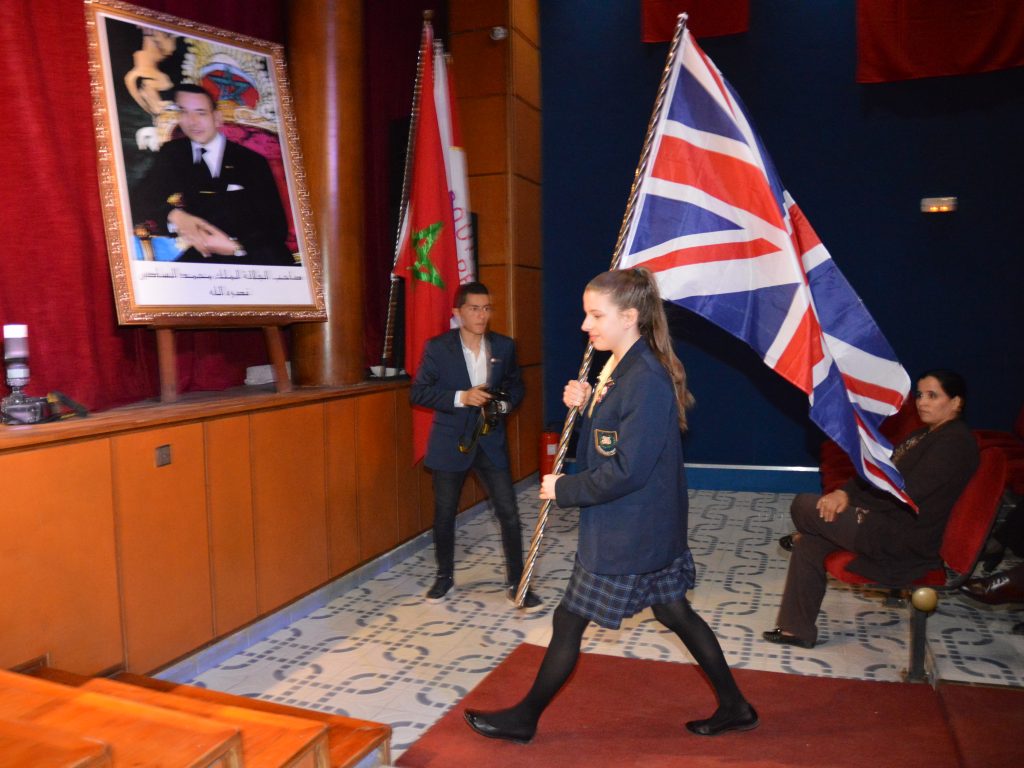 Year 10 and 11 students Scarlett, Emma, Hannah, Charlotte and Georgie had the incredible opportunity to attend the Round Square international conference in Marrakesh, Morocco from 12 – 17 February. The theme of the conference was ‘The Future is Now’ and it brought together students and teachers from Morocco, England, Germany, South Africa, Australia and Canada.

Student and staff delegates arrived in Marrakesh, also known as the ‘Red City’ due to its city walls and red sandstone buildings on Wednesday 12 February and were taken to their hotel where they met fellow students and settled into their rooms. The group then took part in a Laser Tag activity which worked very well as an icebreaker, with the girls soon relaxing and starting to make new friends from all around the world.

Day two of the visit saw the delegates warmly greeted by the students of The Elaraki School who were wearing National dress and performing traditional music and dancing. Everyone was offered traditional Moroccan hospitality of milk and dates. The impressive Opening Ceremony was a wonderful display of flags with representatives from each school parading. Lottie flew the flag for St Mary’s and along with Georgie, gave confident speeches in front of the large international audience. After a delicious lunch, everyone listened to inspirational talks by two keynote speakers who talked passionately about how everyone can all make a difference to make the world a better place.

The delegates joined in debates on world issues around the conference’s theme ‘The Future is Now’ in group Barazza discussions. The opportunity to explore the Old Medina followed, where the visitors were greeted by snake charmers, dancing monkeys and a maze of souks selling brightly coloured goods, aromatic spices and fruit and vegetables. The girls had their hands painted with beautiful Henna patterns by a very skilled (and quick) craftswoman. A meal in a rooftop restaurant, provided a stunning backdrop to watch the sun set over El Fena Square – where the night market was alive with traders, music and dancing.

After an early breakfast on Friday, the delegates were separated into five groups and travelled to the Houz Region, where in the scenic High Atlas Mountains they visited local schools. Working in teams, the students undertook different community service projects which included repainting village schools and interacting with local underprivileged children. Everyone was given a very warm welcome by the local communities and although they were exhausted from their hard work, the girls felt a real sense of achievement and happiness at the difference they had made to the local children.

Visiting the Izdihar Campus (the primary/middle school of Elaraki School), the following day, the girls worked on environmental projects with primary school pupils and their family and friends – this included basket weaving, face painting and a performance of singing and dancing from local Moroccan tribes. The girls even had an encounter with the beautiful resident school peacock, which they all had the chance to hold. Returning to Elaraki School, all the students took part in the ‘Round Square’s Got Talent’ show. St Mary’s gave an energetic performance of Rag’n’Bone Man’s hit song ‘Human’, with other schools providing Bavarian dancing, French rapping and all manner of other entertainment. A feast of different tajines with beautifully cooked meats, nuts and dried fruits was provided – a real explosion of exotic flavours!

For the penultimate day, the groups returned to Elaraki School for more Barazza discussions about how the students could use what they had learnt from the conference to make the world a better place for the future.

A Closing Ceremony followed, before everyone headed out on an exciting visit to the Agafay Desert. This beautiful, untouched desert provided a dramatic contrast from the hustle and bustle of Marrakesh. With nothing to see in the distance except sand, camels and a particular lively donkey, half the group took a camel ride to explore the beautiful landscape. The rest of the group went on a hiking expedition to explore the scenery. The groups then swapped activities.

An Arabian Nights experience was to be the setting for the evening meal, where in huge tents, under the stars and against the desert wind, the delegates sat on the floor and experienced a delicious local dinner. The evening was rounded off with a dance performance from a local tribe, including fire dancing and a striking grand finale with the words ‘The Future is Now’ emblazoned in fire against the backdrop of the dark desert.

A fantastic time was had by all the students, the girls said their tearful goodbyes to the new friends they had made from across the globe.