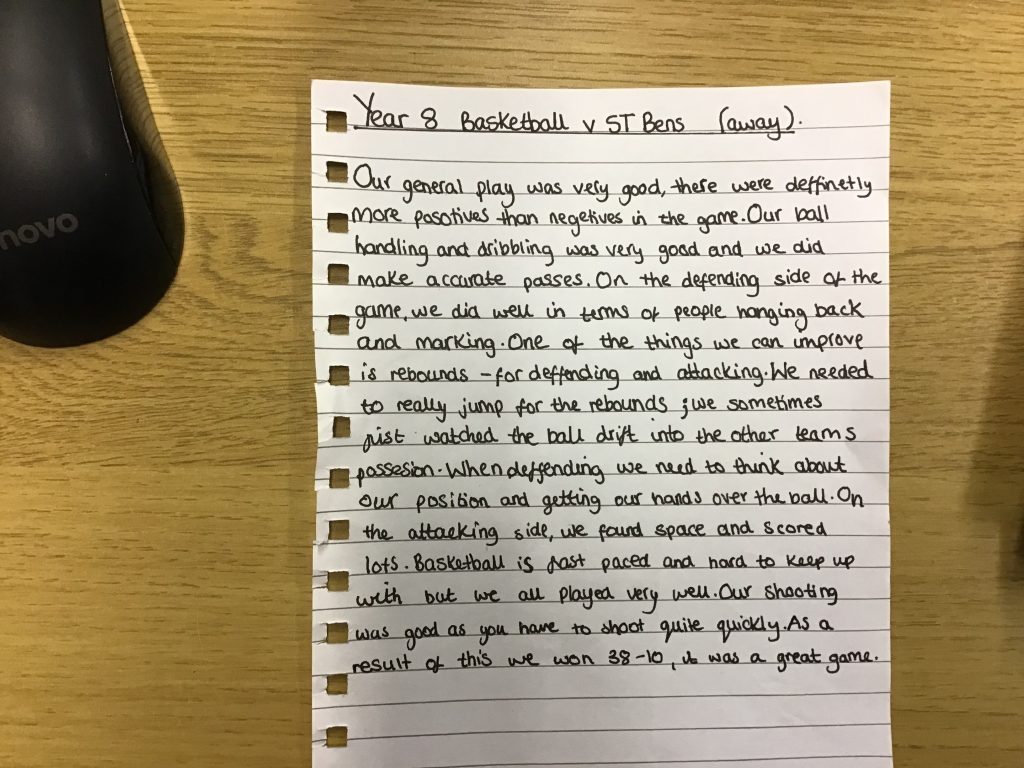 Year 8 had their first game of basketball last night and I think it dawned on them fairly quickly, how different and fast it is in comparison to netball!

They did so well- really listened to the advice I was giving them and clear evidence of applying what I’ve said in practice too – keeping an outlet and not crowding the key. Their attacking play was excellent, quickly picking up interceptions to gain advantage, often converting them to goals, with some super baskets scored by captain Evie.

Defence improved as the game went on, only ‘allowing’ the opposition to score on a couple of occasions. Fantastic effort by the whole team and a convincing victory of 38-10. Marvellous.

We started off well but as the match went on CCHSG scored many goals, even though our GK and GD (Bianca and Gabi) did amazingly defending, the match ended in 4-0 to them.

For this match we gave much better play than our previous first match. We communicated better and this made us perform better. Unfortunately, even though we tried our best we lost 2-0

But I think that we did better this match as our wings (Ruby and Olivia) did really good passing and getting into space which led us to be able to have a few shots.

This was our final game, and we had a good start. As soon as the whistle went we dived right in and got possession of the ball. We did much better with our passing and getting into space this match. And with getting into space and great passes from our shooters (Lily and Sophia) especially GA (Sophia) we were able to have multiple shots on goal and we scored 2! The final score from the match was 2-0 to us.

The Year 7 A team played two teams from Colchester County High School for Girls (CCHSG), another against Philip Morant and a 4th against Thomas Lord Audley School (TLA) at a tournament on Wednesday 2 February.

The first team from CCHSG proved to be their strongest opposition but they worked well together, particularly in the centre court to limit scoring opportunities. They lost this match 0-4.

Their next match against CCHSG was a closer contest with attacking and defending evenly latched on both teams. We just managed to secure a victory of 1-0 which buoyed the team. Subsequently, their enthusiasm and ability to work together resulted in wins against Philip Morant and TLA, 3-0 and 2-0 respectively.

Well done to the whole team, to Sophie R and Lottie C for some super centre court play and defenders Naomie and Misan.

On Thursday, the Year 7 basketball team played in their first basketball game – a tournament hosted by Thomas Lord Audley School. The players were Lily M, Lily P, Lauren, Sophie, and Gabi. Our first game was against Stanway where some excellent defence work and some good shooting from Gabby saw us win the game 6-4.

Next was Colchester County High School for Girls, who we played well against but unfortunately could not convert any of our attempts on basket so came away with a 0-6 loss.

Next up was Philip Morant School in a game in which we found our shooting form again and demonstrated some great passing and tactical awareness resulting in an 8-0 win.

Final game in the pools was against St Benedict’s and was a very close end to end game, unfortunately we lost 2-4. We came joint second in the pool but on points ended up 3rd putting us into the quarter finals against Paxman Academy, again despite the run of play we were unable to convert our many chances and lost the game 4-6 putting us into 7/8 play offs against Stanway.

This time, with all players determined to score and finish on a win they played superbly winning 12-2. Congratulations to all who played – some promising basketball! Let’s work on that shooting!