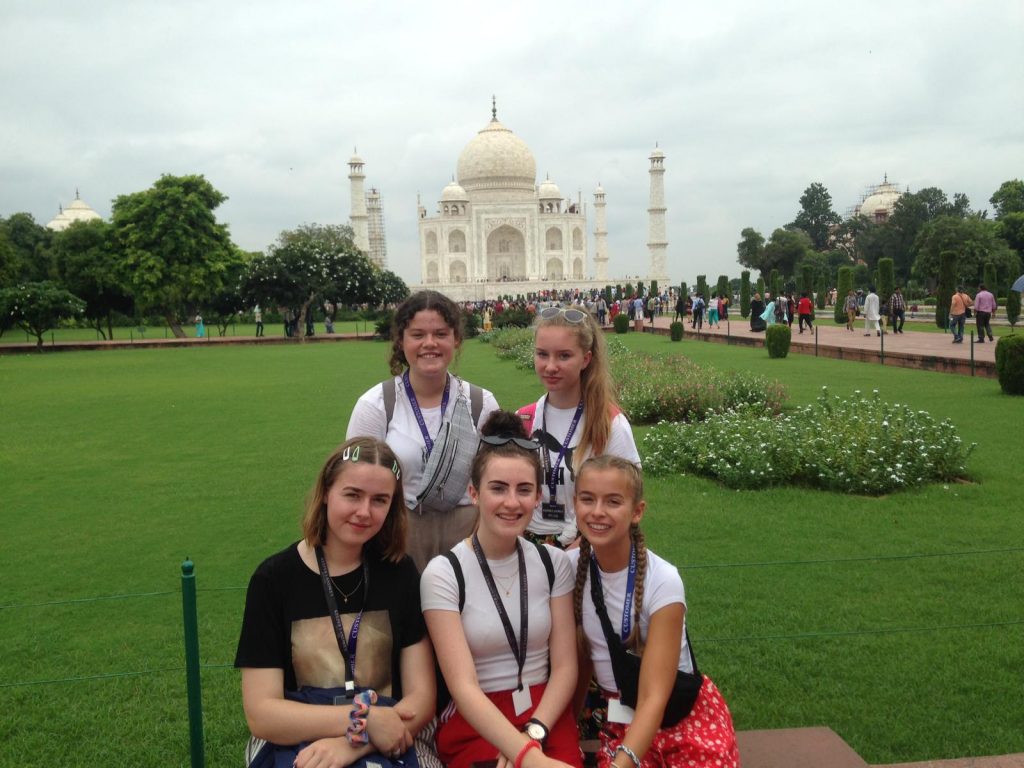 A group of St Mary’s Year 11 students set off on a 10-day visit to India to attend the Round Square International Conference in Indore from 29 September to 8 October 2019.

The five girls, Laura, Jemima, Abby, Emily A and Emily S joined just over 1000 delegates from 156 schools around the globe, covering nearly every continent at The Emerald Heights International School in Indore.

It was a week of multinational and multicultural experience in which delegates from different countries, cultures and perspectives came together to share, learn, understand, and be inspired to make a positive difference in the world.

Focusing on the Round Square ‘Ideals of Learning’– internationalism, democracy, environmentalism, adventure, leadership and service – identified by German educational philosopher, Kurt Hahn, who founded the Round Square organisation in 1966, the students immersed themselves in a full programme of activities.

These included keynote addresses from children’s rights activist and Nobel Peace Laureate, Kailash Satyarthi and Shashi Tharoor, an Indian politician who is currently serving as Member of Parliament as well as Major D.P. Singha, known as India’s first blade runner a retired Indian Army officer who became the first amputee marathon runner of India and Gaur Gopal Das, a former Hewlett Packard engineer turned monk who has become an Indian lifestyle coach and motivational speaker. Each presentation gave the students inspiration and motivation to help mould themselves and their futures. They also gained insight in to the advantages and threats of Artificial Intelligence with the opportunity to meet the first robot citizen ‘Sophia’! They heard a positive and inclusive performance from Kiran Gandhi, an electronic music producer, drummer, artist and activist whose message to the audience was ‘the future is female’! Following each key note speech, the girls worked in discussion groups (called Barazas) to reflect on the content.

The girls embarked on an ‘Adventure Day’, where they explored the ancient city of Mandu. Perched atop a plateau, the historic, ruined city is not only endowed with beautiful natural scenery but also occupies a strategically important location in the landscape, guarding a key mountain pass. It contains many important temples, the third largest Mosque in India, and mausoleums from the Mughal Empire period in India. They also visited several important palaces, such as the Jahaz Mahal or ‘Ship Palace’, which appears to be floating between two artificial lake, and was built as a palace for a Sultan’s 1000-strong harem. A ‘Service Day’ followed, with visits to schools for the blind and deaf where the delegates helped with craft activities for fundraising and learnt Indian sign language. The students also took part in a 3km run with the ‘Indian Bladerunner’ Major D.P. Singh, finishing at the Indore Cancer Hospital with a tree planting ceremony.

Mrs Hilary Vipond, Principal of St Mary’s said that “Laura, Jemima, Abby, Emily and Emily represented St Mary’s with great enthusiasm and had a very mature approach and willingness to enjoy and gain from all that was on offer during our visit to Emerald Heights School in Indore. Our Round Square Global membership offers the school a unique framework for excellence and continuous improvement. The opportunities to collaborate and share experiences with like-minded peers and establishments across the globe is invaluable”.

To watch the video summary of the conference, see: https://youtu.be/dcnCzqJnHNo