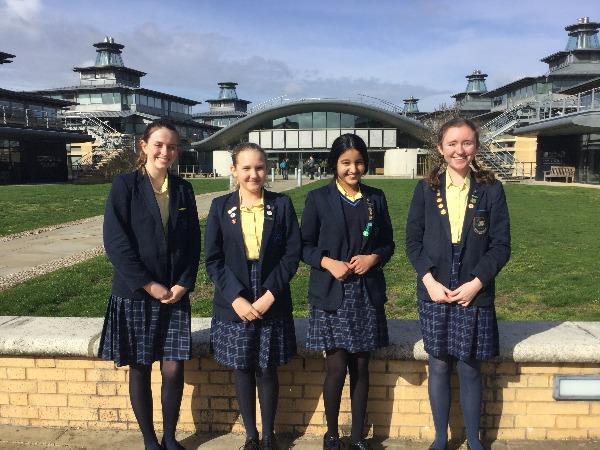 Carina, Georgia, Zoeya and Adrienne represented St Mary’s in the United Kingdom Mathematics Trust Team Challenge on Monday 18 March. This gruelling four round ‘problem solving’ competition was against 30 other schools, held at the Centre for Mathematical Studies, University of Cambridge.

After some warm-up activities and welcome refreshments, to fuel the students’ brains, the first 45 minute round began with ten problems to solve. Following a short break it was onto the Crossnumber round, a crossword style set of problems in which participants need across values to solve the down problems and vice versa as the clues include the answers already found. Working in pairs, the students one shot at each answer – the girls worked brilliantly as a team.

After lunch it was time for the shuttle round, working against the clock to answer four questions that depend on the previous answer being correct in eight minutes. This was repeated four times with each round getting progressively harder. The final round was the relay. This is a frantic 45 minute round of 30 questions that, as the name suggests, involved the students running answers to a marker who gave out the next problem if it’s correct. The girls had two attempts at each question.

We were so very proud of how the St Mary’s team worked throughout the day, all four girls were an absolute credit to the school and their marker praised their enthusiasm throughout the competition.