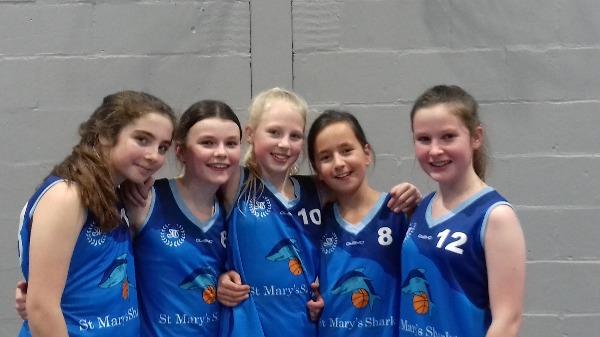 Our first game of the pool was against Colne Community School, we soon found our rhythm, and Annabelle scored a few quick baskets. The team continued to put the pressure on the Colne and readily turned defence into attack and by the end of the six minute game had won 12-0. Next was St Helena, a totally different game, against a very tall and skilful team, who themselves quickly scored several baskets. St Mary’s continued to battle hard in defence and created a few scoring opportunities, however we lost 0-10.

Determined to get through to the semi-finals, we didn’t let our previous loss affect us and were soon up in our final pool game against Philip Morant School, with Izzy scoring some good baskets. A great team effort saw us win 8-4. Through to the semi-finals, we played Stanway School – another team with height on their side. Passing the ball over our heads, they were then able to get most of the rebounds – it was great to see our girls stand strong and continuing to play with spirit and enjoyment. Final score 14-4 to Stanway.

These results put us into third and fourth play offs against St Benedict’s College – a very close, end-to-end game with numerous chances for both teams. Unfortunately for us, St Benedict’s were able to convert just one more attempt than us, giving them the 6-4 win.

A final result of fourth place is still a great achievement. Miss Hawkins, Head of PE was particularly impressed with the superb team effort and support they all showed each other along with the determination to succeed which are all good traits. Well done to all who played.