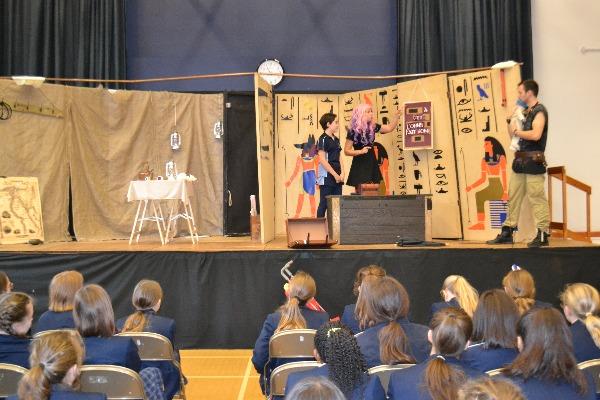 Etienne Alix and Cyrielle Docquincourt, actors from the French touring performing arts company, Onatti Productions delivered a humorous play on Tuesday 6 November, uncovering the challenges faced by two teenagers who are taking part in an Egyptian themed ‘Escape Room’. Watched by Years 9 and 10 students, the performance provided an extra challenge to the audience as it was spoken “au français”. The girls picked up on many words and phrases which they had already come across in their French lessons along with a little help from some clear actions from the actors demonstrating their meaning. There was a great deal of crowd participation, with the Year 9s and 10s assisting the actors on stage to tell out the story. The students were surprised at how much they were able to keep up with the story line!