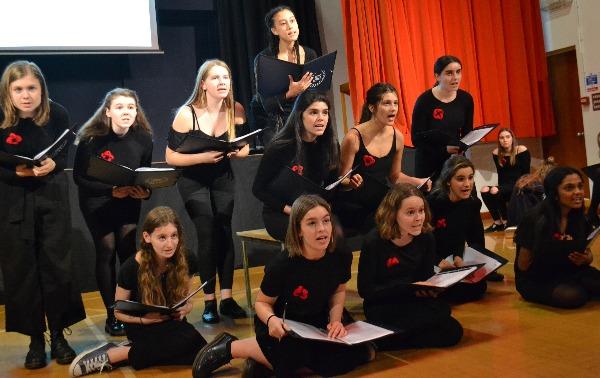 An evening of music and drama in tribute to those who fought in World War One, in its centenary year of the end of the First World War, was presented by Year 11 students on 30 October.

‘We Will Remember Them’ featured moving poetry and prose, as well as songs and dances from the era, were performed to an audience of family and friends, which also numbered members of the Royal British Legion, former soldiers, the Mayor and Mayoress of Colchester and the Deputy Mayor of Colchester, Councillor Nick Cope.

‘My wife and I loved the performance,’ said Councillor Peter Chillingworth, Mayor of Colchester . ‘I have great admiration for the girls’ singing and performing skills. We were both affected by the understanding of the WW theme and poignancy the girls brought to it. We were particularly impressed by the continuity and how they appeared to join up the pieces without prompting or outside direction.

The girls performed a debut of the song ‘Nowhere’ written by Deputy Mayor of Colchester, Councillor Nick Cope who said: ‘I was moved and overwhelmed with the pleasure and appreciation of the students’ performance, a truly memorable evening for me’.