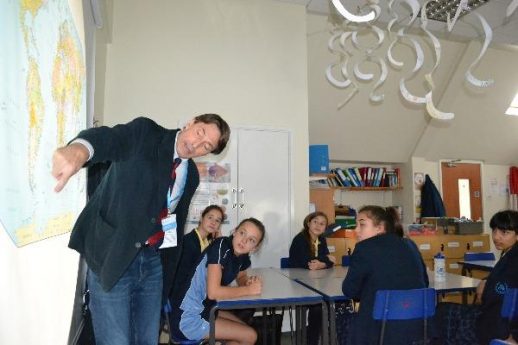 I think that several of the real-life tales that author and film-maker Matt Dickinson, shared with some of us, when he visited last week, will be in my mind forever. Particularly one tale about his experiences with frostbite whilst climbing Everest which wasn’t for the faint-hearted…it made us all laugh at the end though! The girls were so enthused and fascinated that they produced some outstanding pieces of creative writing based on the one thing they would individually miss the most if they were on an Everest expedition.

Matt gave the girls basic guidance on writing structure then told them to write from the heart and challenge the reader. The resulting stories were a delight – many were based on animals, mainly dogs. Others wrote about family and food but the common denominator in all the stories was detail and emotion – we were moved to tears by some and really laughed at others. I was also taken aback and impressed by those keen to read their work out and receive Matt’s feedback. It was inspirational.

No less inspiring was a session with some of our Year 8 geographers which featured stunning footage from a trip Matt made to Antarctica. We only had an hour but we covered food chains, tectonic plates, energy, the environment, climate change and more… Fascinating to say the least and the message to learn and get involved would have been irresistible to my younger self!