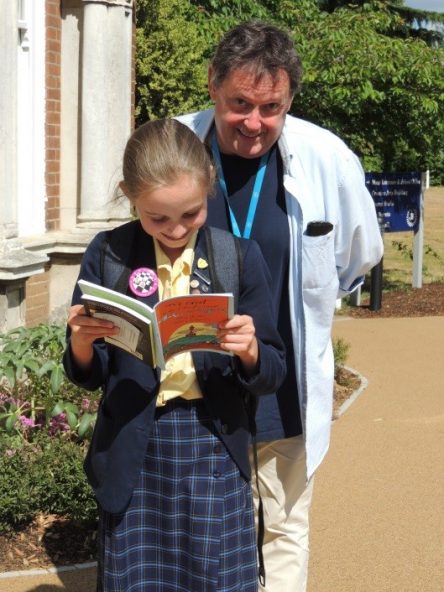 We moved from buckets to keys in the Festival today with Charlie’s Key, which is the title of a book by storyteller John Harris. John told at least 10 stories during the course of the day (I confess to losing count), totally off the top of his head without any hesitation.

I cried (again) when John told a sad story to Years 5 and 6 about a princess and a very poor young man she fell in love with. There were myths, silly stories, lots of wonderful tales set in swamps and forests and a scary story about a telephone told to Year 7 which had just the right amount of “scare” – even scarier when John told us it was true!

If you’re lucky some of the stories will have reached home, as John asked each of his audiences to tell one of the stories they`d heard to someone else before going to bed.

In John’s eyes “A good storyteller takes children to another world, in which their imaginations are set free, the gamut of emotions is run, and the experience of others can be understood, related to, and learned from.”  We certainly had a good storyteller and I can vouch for the emotions.