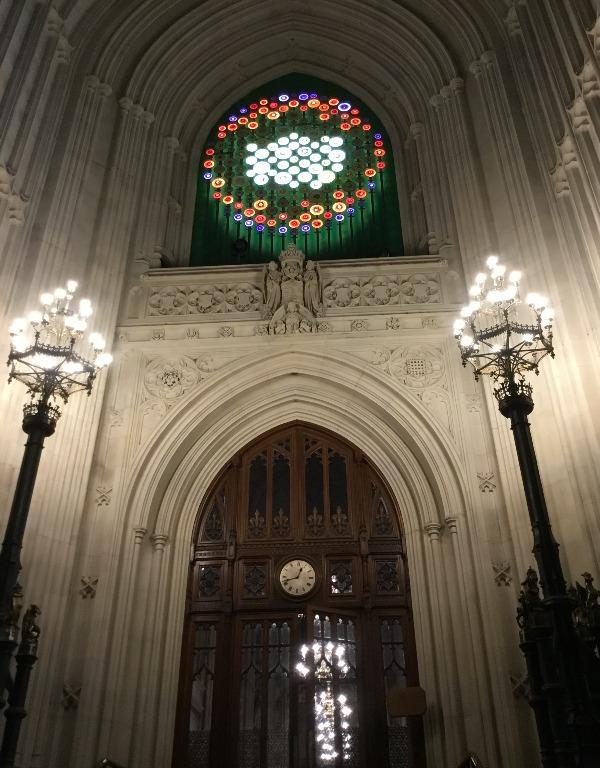 Year 6 enjoyed a fabulous visit to the Houses of Parliament on Wednesday 7 November as part of their History and Citizenship topics of Parliament and Votes for Women.

First they visited the House of Lords via the Queen’s private robing room and ante-chamber (noticing the petite throne designed for Queen Victoria). The girls enjoyed seeing the gilded throne of Queen Elizabeth II and the lavish decoration inside the House of Lords. They were led to the Division Lobby into the House of Commons before passing through the Members Chamber, although they were not permitted to sit on the leather seats in either House! The girls found it interesting to hear that no monarch has been permitted to enter the House of Commons since 1642, where laws have been passed and discussed.

At the end of the tour, the pupils were privileged to see the new abstract art exhibit, ‘New Dawn’ designed by Mary Branson at the entrance to St Stephen’s Hall. A light sculpture on display, celebrates 150 years since the campaign for women’s rights began and its scale reflects the size of the campaign and the individuals involved in the movement for democracy.

Outside the Palace of Westminster, the girls admired the statue of WSPU founder and Suffragette, Emmeline Pankhurst before heading off to the Museum of London to see a range of source material and artifacts related to the Suffragettes and to watch a video reel of the history of Votes for Women with modern historians offering their insight. The girls found it fascinating to learn of their persistence and courage – values promoted at school. They returned from the experience, empowered and determined to use their voices as future voters!