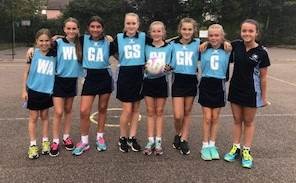 The Year 7 Netball team took part in their first tournament on Tuesday 2 October at The Gilberd School with a very keen and enthusiastic attitude throughout the tournament. The first game against Colchester High School for Girls was the most difficult with the score ending in a 6-0 loss. We then played Phillip Morant School in a really tight game which unfortunately ended in a 2-0 loss. The girls achieved great results against The Gilberd and Thomas Lord Audley School, winning 6-0 and 5-0 respectively. Well done girls – a really excellent start to the league!

On Wednesday 3 October, the Year 8s played Thurstable School in their first league game of the season. The team started strongly and were 6-2 up by the end of the first quarter. Despite several changes of positions within the team, the girls continued to play well, pulling further away at every opportunity. The team were victorious with a 23-10 win! It was encouraging to see such positive team play coupled with some superb defence work and accurate shooting. Well done to all who played.

The Year 10 Netball team also played Thurstable School in their first match of the season on Wednesday. Despite the fact that there were a few last minute changes to the team, the girls coped very well, fighting for every ball. Defence was strong and the scores even until the beginning of the third quarter, when Thurstable took a small lead. Final score, 6-18 to Thurstable.