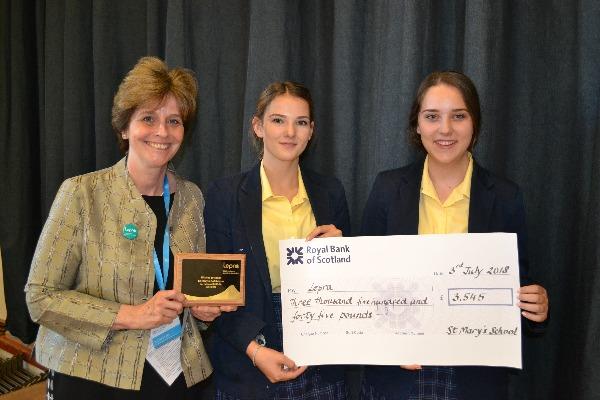 St Mary’s Year 10 students, Orla and Tallulah were delighted to present a cheque to the Senior School’s charity of the year Lepra in assembly on Tuesday 3 July for a whopping £3,545 donation!

The proceeds were raised through a variety of activities throughout the academic year, including the annual St Mary’s cross country race, a sponsored readathon, a weekly sweet sale, school sleepovers and an Easter egg raffle. These funds could go towards buying 600 pairs of protective sandals for school children in communities in Bangladesh, India and Mozambique to help prevent further disabilities for those affected by leprosy.

Lepra is a Colchester-based international charity working to beat leprosy. This disease affects millions of the most vulnerable people in the world, causing life-changing disabilities and attracting terrible stigma. But there is a cure. Lepra work directly with communities in Bangladesh, India and Mozambique to find, diagnose and treat affected by leprosy and in 2016-2017, the charity reached 252,000 people through diagnosis, treatment and care. They reached a further 1.3 million people through health education and events to raise awareness of leprosy and other neglected diseases.

Trusts Fundraiser at Lepra, Angela Stafford said “I was impressed by the number of charitable activities that the students of St Mary’s School organised over the last 12 months. Having an appreciation and concern about the problems people face around the world and at home and taking action to help is an important lesson for everyone to learn. We are delighted that the school choose Lepra as their charity of the year and raised such an incredible amount to help people affected by leprosy in India, Bangladesh and Mozambique”.