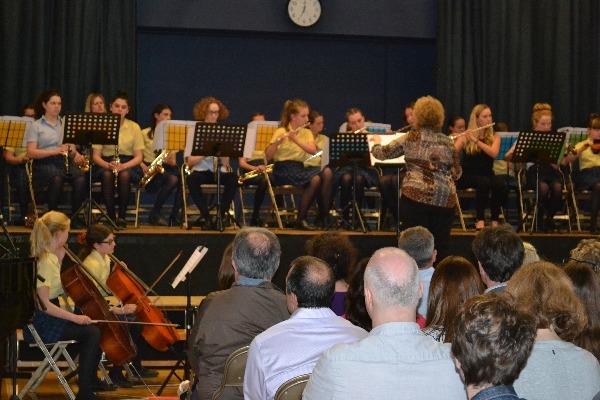 The Orchestra got the evening underway with a performance of “A Magical Suite” from John Williams’ enchanting soundtrack from the Harry Potter series. The Year 10 Music GCSE group sung some beautiful harmonies as they performed “A Wedding Mash Up” of popular love songs, which was followed by a “Whimsical Waltz” played by three talented woodwind players from Year 11. The Chamber Choir sung a moving rendition of the popular song “Run” before Molly and Sarah (Year 8) played an energetic and jazzy piano duet. Lily, Jessica, Abigail, Grace and Isabella from Years 10 and 11 really showed their vocal skills by performing two a capella pieces in complex 3 and 4-part harmony, which was followed by the Senior Choir performing an arrangement of “City of Stars” from the film La La Land. The first half was rounded off by the Senior Choir singing “Shadowland” from The Lion King with descant soloists Harani and Rebecca and flautist Amy performing along with the choir.

The second half began with a striking Trumpet Fanfare from Molly (Year 8) followed by a bold performance of the Theme from “Game of Thrones” by the Orchestra.  An ensemble of Year 9 vocalists sung the beautiful “I See the Light” in 2-part harmony followed by Bethany and Angelica (Year 10) playing a lively clarinet duet of Mozart’s famous “Papageno’s Aria”. The Chamber Choir returned to sing Adele’s moving song “Hello” in complex 3-part harmony which was followed by a wonderful vocal and flute duet by Rebecca and Amy (Year 10) and an enchanting vocal solo performance by Isabella (Year 10). The Year 11 GCSE Music ensemble performed their own arrangement of the very aptly chosen song “One Last Time” and a few tears were shed by both the girls and audience members! The Senior Choir finished off the evening by singing the traditional Scottish “Skye Boat Song” and a lively, fun-filled rendition of “I’ll Be There For You” from the TV series Friends. It was a wonderful evening filled with a diverse range of music performed by an array of very talented musicians at St Mary’s.