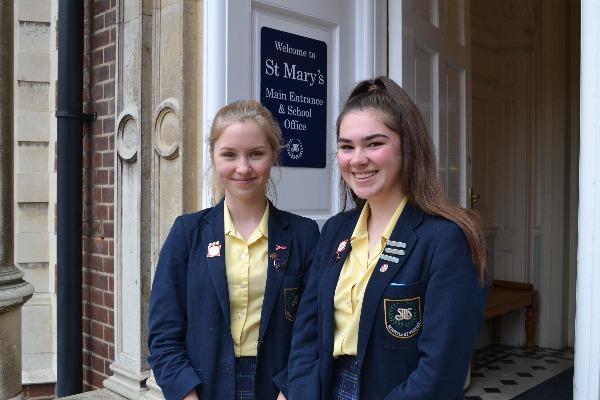 Harriet and Romilly have been named as our next Senior School Head Girls, taking over duties from current Head Girls, Esme and Holly, after Easter and serving until the start of the Summer Term 2019.

“Over the years, St Mary’s has helped me to become the very best version of myself and now it is my turn to contribute to the school community and to help the younger pupils to achieve their own ambitions,” said Romilly when the results were announced after an intensive hustings and interview selection process.“I have loved my time at St Mary’s and feel lucky to go to such a great school. It is an honour to be able to represent the school in such a key role.”

Harriet astonished herself with her success! “In the four years I have been at St Mary’s, I’ve been given so many opportunities and have become fully immersed in school life, participating in orchestra, sports teams, school committees, community service and mentoring younger pupils. This has helped me to become much more confident and taught me both leadership and team building skills. I am very much looking forward to putting these in to practice in my new role as a Head Girl.”

“We are delighted to have had such a superb number and level of applicants for these vital roles,” said Miss Jones, Director of St Mary’s Senior School.  “Hattie and Romilly will be lead ambassadors for our school and they have already started shadowing Esme and Holly and contributing to decision-making at the heart of the school. They will soon take over responsibilities including welcoming parents at parents’ evenings, overseeing taster days for younger pupils, touring visitors, giving speeches at our Prize Giving and the Carol Concert, and organising next year’s leavers’ book and prom.  “It was a tough selection process and they have already achieved so much,” she added. “All the candidates in the hustings have been an inspiration to the younger year groups and have shown that St Mary’s is the ideal place to ‘have a go’ and find out your own personal potential and strengths, whatever those may be.”