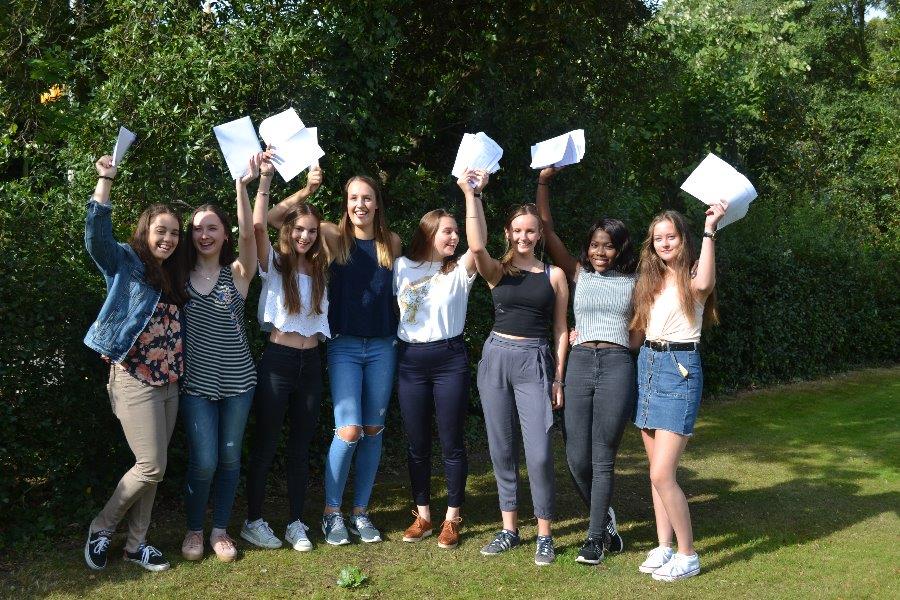 GCSE results at St Mary’s Colchester are as excellent as ever, despite the change to the grading system that has come into effect this year.

New-style GCSEs in English Language, English Literature and Maths were taken by Year 11 students and graded by numbers, with nine as the highest mark and one the lowest. Grades nine, eight and seven are broadly equivalent to an A* and A, while grades six, five and four are in line with B and C grades (a four is broadly being compared to a C grade). Education Secretary Justine Greening has said that a grade four will be seen as a “standard pass” and a grade five as a “strong pass”.

Overall 92% of GCSEs at St Mary’s were graded at C or four, or above, and 90% of the 40 St Mary’s candidates achieved a minimum of five passes at A* to C, or grade four and above, including Mathematics and English. There was a 100% pass rate in 13 subjects – Art, Biology, Chemistry, Dutch, German, ICT, Music, Photography, Physics, Religious Studies, Spanish, Statistics and Textiles. Performance at GCSE has been consistently high at St Mary’s for the past six years, despite the fact that the school is non-selective on entry.

“This has been a challenging year for GCSE candidates across the country and I am particularly pleased with our students’ achievements and also their approach to the new exams,” said St Mary’s Principal, Mrs Hilary Vipond. “GCSE results at St Mary’s continue to be impressive. This is a real reflection of our students’ hard work, combined with the high-quality teaching, individual attention and the unwavering support of our very close-knit school community at St Mary’s. This means that our students are able to achieve their academic potential at our school, and enjoy doing so.”

Charlotte, who achieved two A*s, four As, two Bs and three 7s, will join the Sixth Form at Ipswich School to take A levels in Maths, Physics, Geography and Design Technology to prepare her for a possible future career in Architecture. Charlotte joined St Mary’s in Year 4 and has really appreciated the support of her teachers throughout – “we had extra revision sessions and lessons in exam technique right up to the last day”, she says.

Grace achieved seven As and three 6s, which she hopes will prepare her for a career in the fashion industry. She will join The Sixth Form College Colchester to take A levels in Textiles, Spanish, Biology and Psychology.

Lydia achieved five A*s, 2 As, two 8s and one 6 and will take up her place at Colchester Royal Grammar School to study for A levels in Maths, Physics, Economics and Religious Studies, with the aim of a career as a commercial airline pilot or in the RAF.

The happy environment at St Mary’s encouraged Katie to achieve three A*s, four As, one 8 and two 7s. She will study for A levels in Biology, Geography, Psychology and Economics at The Sixth Form College Colchester

Harriet achieved 12 GCSEs in total – two A*s, five As, two Bs, one 7, two 6s – having passed French and Statistics one year early and Dutch two years early. Harriet is keen to get started on the International Baccalaureate course at The Sixth Form College Colchester, perhaps followed by a gap year in Fiji and a career in humanitarian work.

Imogen achieved one A*, six As, one 8 and two 6s and will study for A levels in English Literature and Language, Politics and Law or Economics at The Sixth Form College Colchester.

With one A*, five As, one B, two 7s and one 6, Mariam will join the sixth forms of either Chelmsford County High School or King Edward VI Grammar School to take A levels in Maths, Economics, Chemistry and Product Design. Mariam has attended St Mary’s for the last three years and has been impressed by the dedication of the teaching staff. “My questions were always answered,” she says.

A place at Colchester Royal Grammar School awaits Sophie, who achieved six A*s, one A and three 8s. She will take A levels in Maths, Biology, Physics and Art to prepare her for a potential future career in Architecture.

Not pictured, Susan achieved three A*s, four As, two 8s and a 7.