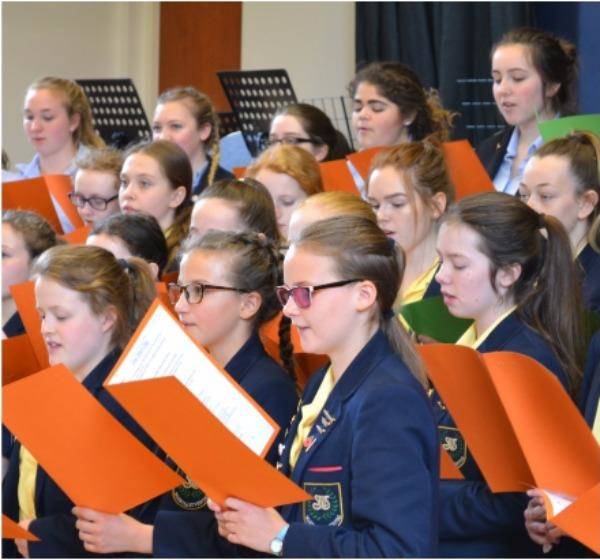 All musical tastes were catered for at our Spring Concert on 10 May.

The Orchestra got the evening underway with ‘Sleeping Lake’ by Tchaikovsky, Jade (Year 9) performed a solo of ‘Riptide’, and the 100-strong choir gave a moving rendition of ‘One Day I’ll Fly Away’ and then ‘Breakaway’. Esme (Year 10) played ‘The Earth Prelude’ on piano, Lily (Year 10) and Harani (Year 9) performed a vocal duet, which was followed by a recorder solo by Pippa (Year 8). Grace (Year 10) sang a solo of ‘Your Daddy’s Son’, and the Senior Choir rounded off the first half with ‘A Thousand Years’ and ‘Adiemus’.

In the second half, the Orchestra performed the popular ‘James Bond’ theme and there were instrumental and vocal ensemble performances by musicians in Years 9, 10 and 11. Abigail (Year 10) sang ‘Uncharted’ and the Chamber Choir performed a traditional Zulu piece, ‘Candle on the Water’.

Year 11 Choir members gave a surprise finale, singing a piece entitled ‘When I Grow Up’, which they had prepared themselves.

It was a spectacular evening, which really showed the breadth of musical talent at the school.